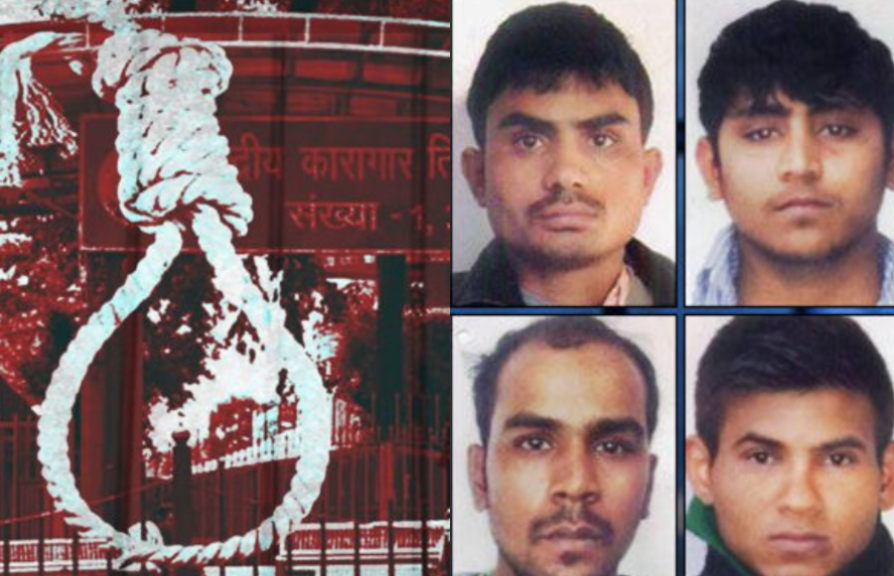 The four men convicted in the 2012 Nirbhaya gang-rape and murder of a Delhi woman on December 16, 2012 were hanged in the darkness of pre-dawn on Friday, ending a horrific chapter in India’s long history of sexual assault that had seared the nation’s soul. The four convicted were hanged at 5.30 am, Director General of Prison Sandeep Goel stated. While the top court (SC), after a midnight hearing, rejected a last-minute plea filed by one of the convicts seeking a review of the death penalty.

Meanwhile, Speaking to media shortly after the four Nirbhaya convicts were hanged, the victim’s mother, ‘Asha Devi’, thanked the judiciary and the government for ensuring that the rapists of her daughter were executed. “It may have taken time, but justice was finally delivered,” she stated.

Further, She stated that, “Proud to be known as Nirbhaya’s mother. She fought so hard. And I have waited long to see this day. The flaw in our justice system were exposed. But finally all four were hanged in one go. A first of its kind of justice, which will definitely be a lesson to others.” Asha Devi added.

A visibly relieved Asha Devi stated that the hangings of the four convicts would send a strong signal for deterrence. “Our fight for security of daughters across the country will continue,”. I returned from the Supreme Court, hugged my daughter’s photograph and told her: “Today, justice has been delivered,”. She asserted.

It is of utmost importance to ensure dignity and safety of women.

Our Nari Shakti has excelled in every field. Together, we have to build a nation where the focus is on women empowerment, where there is emphasis on equality and opportunity.

PM Narendra Modi on Nirbhaya Convicts hanged, attributed that, “Justice has prevailed. It is of utmost importance to ensure dignity and safety of women. Our Nari Shakti has excelled in every field. Together, we have to build a nation where the focus is on women empowerment, where there is emphasis on equality and opportunity”.

The four men namely; Akshay Kumar Singh (31), Pawan Gupta (25), Vinay Sharma (26) and Mukesh Singh (32) – were hanged at 5:30 am at National Capital’s “Tihar Jail”. The four were convicted for the gang-raping and murdering a 23-year-old medical student, who came to be called Nirbhaya, in a moving bus in Delhi in December 2012. Nirbhaya subsequently died of her injuries.

Read Also, 4 convicts executed for the 1st time in Tihar

Although, A Delhi court issued the fresh death warrants against the convicts. This is the third time that death warrants against the convicts in the Nirbhaya case have been issued. The new date for execution was set by Additional Session Judge Dharmender Rana at the Patiala House court after Supreme Court granted permission to the authorities to approach trial court for the issuance of a fresh date.

Moreover, Sandeep Goel, Director General of Tihar jail: Doctor has examined all four convicts (of 2012 Delhi gang-rape case) and declared them dead. According to protocol, the bodies of the four men will remain hanging for the next 30 minutes after which they will be lowered and examined by a doctor. The bodies will then be sent for post-mortem after which they will be released to the respective families.

Significantly, This is the first time that four men have been hanged together in Tihar Jail, South Asia’s largest prison complex that houses more than 16,000 inmates. The executions were carried out after the men exhausted every possible legal avenue to escape the gallows. Their desperate attempts only postponed the inevitable by less than two months after the first date of execution was set for January 22.

#WATCH Asha Devi, mother of 2012 Delhi gang rape victim says, “As soon as I returned from Supreme Court, I hugged the picture of my daughter and said today you got justice”. pic.twitter.com/OKXnS3iwLr

Following the case, After raping and brutalising the woman, the men, one of whom was a juvenile at the time, dumped her on the road and left for dead on the cold winter night. Her friend who was with her was also severely beaten and thrown out along with her. She was so severely violated that her insides were spilling out when she was taken to hospital. She died in a Singapore hospital after battling for her life for a fortnight.

Six people, including the four convicts and the juvenile, were named as accused. While Ram Singh allegedly committed suicide in the Tihar Jail days after the trial began in the case, the juvenile was released in 2015 after spending three years in a correctional home.

The road to the gallows was a long and circuitous one, going through the lower courts, the High Court, the Supreme Court and the president’s office before going back to the Supreme Court that heard and rejected various curative petitions.

The death warrants were deferred by a court thrice on the grounds that the convicts had not exhausted all their legal remedies and that the mercy petition of one or the other was before the president. On March 5, a trial court issued fresh death warrants for March 20 at 5.30 am as the final date for the execution.

Despite all of this, Rekha Sharma, Chairperson of National Commission for Women (NCW) on Nirbhaya Convicts hanged said that, “An example has been set today but it could have been done earlier. Now people know that they will be punished, you may extend the date but you will get punished,” She asserted. Swati Maliwal, chairperson, Delhi Commission for Women (DCW) stated that, “It’s a historic day, Nirbhaya got justice after over 7 years, her soul must have found peace today. The country has given a strong message to rapists that if you commit this crime, you will be hanged”.

India’s emergence as a superpower