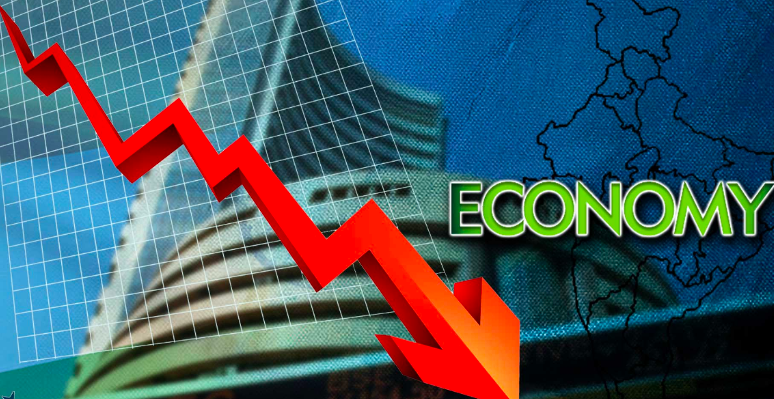 The crisis brewing within the Indian economy has gained unanimous acceptance by now. As per the, Congress spokesperson Manish Tewari, “A serious slowdown brewing in our economy is something we all know, barring the custodians of governance who have chosen to live in oblivion. Nobel laureate Abhijit Banerjee raising a concern over ‘economic depression’ was much called for. Further, Abhijit Banerjee and Esther Duflo were among the 108 economists who wrote to the NDA/BJP Govt accusing them of fudging economic data. Then Finance Minister called them Compulsive Contrarians. The Nobel Committee obviously thought there was more in them”.

In a scathing attack on the government, the Congress on Oct 15 mentioned that the condition of the economy is a “man-made tragedy” and the “project” to turn India into a majoritarian nation has “completely crippled” its economic development. The slowdown has a humanitarian side to it as manifested in death due to heart attack of an account holder in the Punjab & Maharashtra Cooperative (PMC) Bank and allege suicide of Cafe Coffee Day founder V G Siddhartha, Congress spokesperson Manish Tewari asserted in its recent statement. Mr Tewari also remarked that, a critical analysis of the government’s policies by Parakala Prabhakar, a noted political economist and husband of Finance Minister Nirmala Sitharaman, to claim that the economy is in “grave danger”, PTI News agency reported here.

Meanwhile, Parakala Prabhakar, in an recent article in The Hindu, attributed there is anxiety all over about the economic slowdown in the country. “While the government is yet in denial mode, data flowing uninterruptedly into the public domain show that sector after sector is staring at a seriously challenging situation,”. The Author marked that private consumption has contracted, GDP growth is at a six-year low and unemployment is at a 45-year-high. The government, however, is yet to show signs that it has come to grips with what ails the economy, Prabhakar claimed. The problem is rooted mainly in the BJP’s inexplicable reluctance, over the years, to develop its own coherent set of ideas about the country’s economy.

Further, The rejection of Nehruvian ‘socialistic pattern of society’ was clear since the days of the Bharatiya Jana Sangh. The BJP’s advocacy of what can, at best, be loosely termed as a capitalist, free market framework remained untested in practice. The party’s economic ideology and its articulation were limited to mainly critiquing the Nehruvian model from the fringes of the political spectrum. The BJP’s flirting with Gandhian socialism did not last for more than a few months after its founding. In economic policy, the party mainly adopted ‘Neti Neti (Not this, Not this’), without articulating what was its own ‘Niti (policy)’, Parakala Prabhakar, in an Article in The Hindu attributed.

Read Also,  A lodestar to steer the economy (By Prabhakar, The Hindu)

While Mr Tewari attacked the government, adding that the condition of the economy is a “man-made tragedy”. Further, “The NDA-BJP government has manufactured the current economic crisis through its inaction and through policies which it has pursued over the past five years,”. Mr Tewari alleged that the fundamentals of the Indian economy are in difficulty.. “Be it savings, expenditure, credit off take and investment. The wheels of the economy have stopped rotating,” he noted. “Social discord and economic development cannot go hand in hand. This project to turn India into a majoritarian nation has completely and absolutely crippled the Indian economy,”.

Highlighting the PMC Bank scam and the State Bank of India”s reported loan write off worth 76,000 crore, he said the confidence of the people in the banking sector is completely shaken. Tewari also asserted that Nobel Prize winner Indian-origin economist Abhijit Banerjee, along with other economists, had written a letter in which they accused the government of fudging economic figures. Former finance minister late Arun Jaitley had described those who had written the letter as “compulsive contrarians”, but the world has considered him to fit to be given a Nobel. The report said.

“Our apprehension is that we will not be able to come out if this crisis as the government has no clue about it,”. He also slammed the government over the “judicial custody” of former finance minister P Chidambaram in the INX media case, claiming that he is being held captive in a false case. “He had given a dream budget. We are not saying this, but the former RBI Governor Raghuram Rajan had mentioned this,” he asserted in its recent statement. However, The ‘structural’ and ‘cyclical’ issues are plaguing our economy and in order to bring the economy back to a respectable growth path both short-term and long term measures are required. Declining savings especially household saving is a main menace for the Indian economy and is leading to structural growth slowdown.

Notably, The spurt in instances of job losses from automobile manufacturers to biscuit makers has led to the general acceptance of the downturn. This is the third instance of an economic slowdown for India in the past decade after the ones that began in June 2008 and March 2011. The technical term for the same is growth recession. A recession is defined in economics as three consecutive quarters of contraction in GDP. But since India is a large developing economy, contraction is a rarity. The last instance of negative growth for India was in 1979. A growth recession is more commonplace where the economy continues to grow but at a slower pace than usual for a sustained period, what India has been facing nowadays, The research remarked.

Many Economists also attributed that, A leading dampener is the US-China trade war, which has intensified over time and has contracted world trade and, in turn, Indian exports. Also, high rates of GST, liquidity crisis in NBFCs, and shift in the behavioural pattern of the workforce due to the entry of young people has discouraged savings. When people save less in the economy, it leaves less money for investments. Recession can be short-lived if corrective actions are taken immediately, failure of which can have a prolonged effect on the health of an economy.

Meanwhile, Amit Kapoor is chair, Institute for Competitiveness remarked, Recession can be short-lived if corrective actions are taken immediately, failure of which can have a prolonged effect on the health of an economy. Amidst the news of slowdown, rise in FDI inflows from $12.7bn (FY19) to $16.3 bn (Q1 FY20) brought respite for the government. In a welcoming move, government revised GST for the automobile sector, opened up FDI in contract manufacturing sector and even announced the recapitalization of the banking sector. Together with these, it should also focus on optimum utilization of funds granted by RBI and direct them to boost investment in the economy both infrastructural and research investment.

Despite all of this, According to a report published by World Bank (WB) on Oct 13, After a broad-based deceleration in the initial quarters of this fiscal year, India’s growth rate is projected to fall to 6%. In 2018-19, the growth rate of the Nation stood at 6.9%. Bangladesh and Nepal are estimated to grow faster than India in 2019, which mark that overall growth in South Asia is projected to slow down this fiscal in line with a global downward trends, according to the World Bank.

Although, the WB in its latest remark of the “South Asia Economic Focus” attributed that, the country was expected to gradually recover to 6.9% in 2021 and 7.2% in 2022 as it assumed that the monetary stance would remain accommodative, given benign price dynamics. Significantly, Structural shifts over the long run can be achieved through tapping into the health and education sectors that long for quality improvements. Only such long-lasting structural changes can improve the growth potential of the Indian economy and deter the possibility of three slowdowns within the short span of a decade.