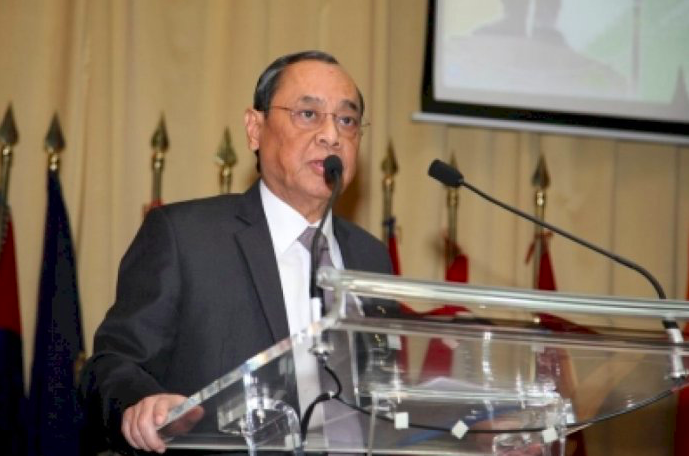 Former Chief Justice of India (CJI) Ranjan Gogoi on March 19 took oath as Rajya Sabha member in the presence of Prime Minister Narendra Modi and Union Home Minister Amit Shah, who attended the 11 am ceremony. Although, Several members of the Congress, which has criticised his Rajya Sabha nomination, shouted ‘shame’ and ‘deal’ as the former CJI took oath.

Significantly, Gogoi headed benches that pronounced several key judgements, including in the sensitive Ayodhya land dispute case. Gogoi also led the benches that ruled on the Rafale fighter jet deal and the entry of women in Kerala’s Sabarimala temple. Notably, The Ex CJI was nominated to the Rajya Sabha by President Ram Nath Kovind on March 16. A notification announcing his nomination to the Upper House was issued by the Ministry of Home Affairs on Monday night.

As per the notification issued by union home ministry, “In exercise of the powers conferred by sub-clause (a) of clause (1) of article 80 of the Constitution of India, read with clause (3) of that article, the President of India is pleased to nominate Shri Ranjan Gogoi to the Council of States to fill the vacancy caused due to the retirement of one of the nominated members,”. It stated.

However, His nomination was questioned by many parties, reacting to which Gogoi said he would speak in detail about accepting the offer of a seat to the Upper House after he takes oath. “Let me first take oath, then I will speak in detail to the media why I accepted this and why I am going to Rajya Sabha,” he stated on Tuesday.

“My presence in parliament will be an opportunity to project the views of the judiciary before the legislature and vice versa,”. “Let God give me the strength to have an independent voice in the parliament, I have much to say, but let me take the oath in the parliament and then I shall open up”, the former CJI stated on March 19.

On the criticism of his RS nomination, Gogoi told that, “I have accepted the offer of the nomination to the Rajya Sabha because of a strong conviction that the legislature and judiciary must at some point of time work together for nation-building”. Ranjan Gogoi, 65, retired as CJI last November after a tenure of a little over 13 months. He will be the first former CJI to be nominated to Rajya Sabha, with opposition parties kicking up a controversy and criticising his appointment.

Despite the same, He was among the apex court’s four sitting judges who held an unprecedented press conference in January 2018 when they claimed then Chief Justice Dipak Misra had allotted “selective assignment of cases to preferred judges” and “sensitive cases were being allotted to junior judges”.