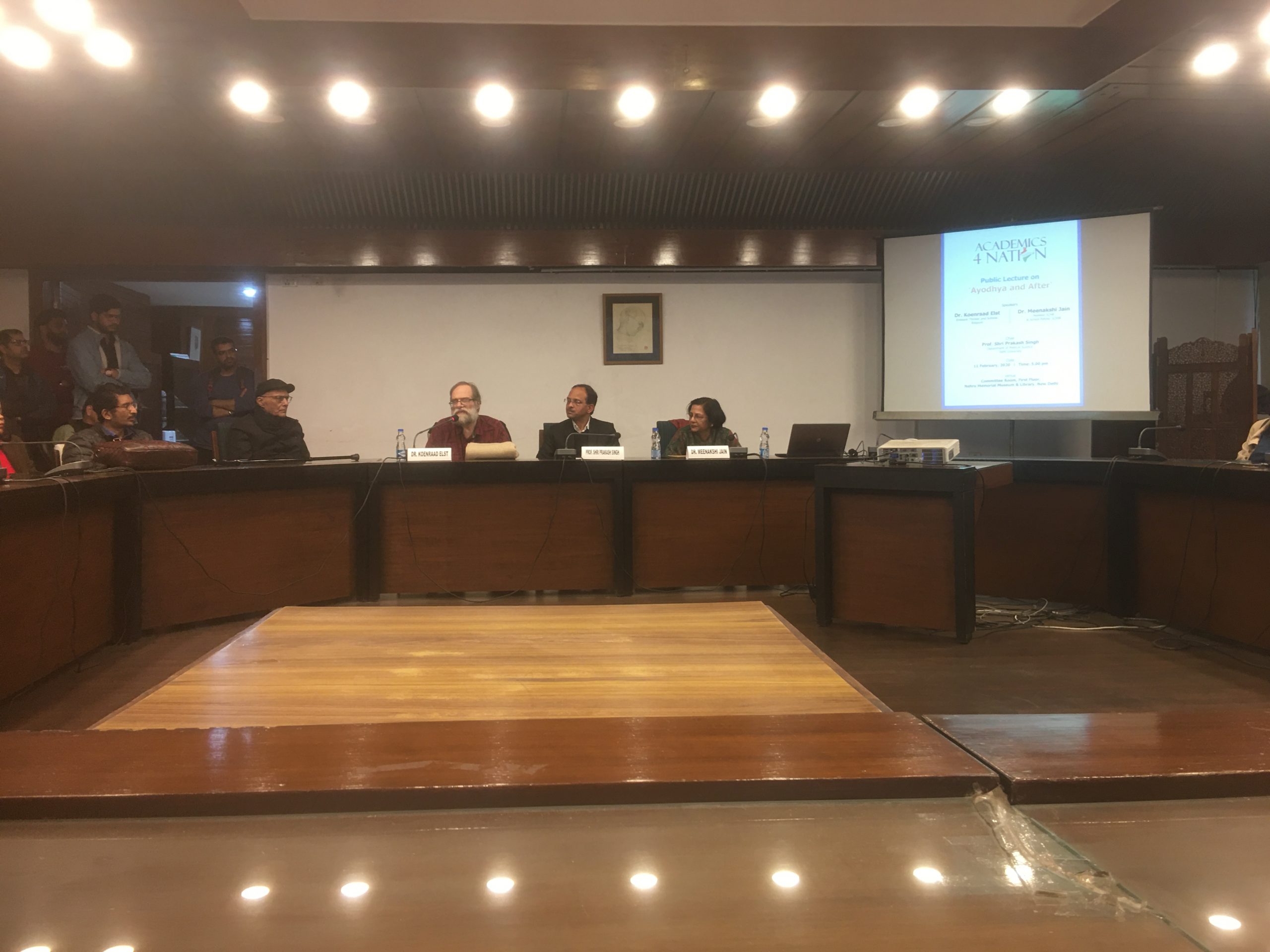 A new think-tank network named, ‘Academics for Nation’, on Feb 11, organised a Public lecture on “Ayodhya and After” at Nehru Memorial Museum & Library, galaxy of Eminent intellectuals has been described about the concerned theme and talked about the various evidences, chronology of Ayodhya and it’s prospect at large.

Meanwhile, Dr Koenraad Elst talked about the chronology of Ayodhya and said that, “The Hindu society is not primarily with the Muslim community. The most significant opponents of Hindu society today are not the Islamic communal leaders, but the interiorized colonial rulers of India, the alternated English-educated and mostly Left-leaning elite that noisily advertises its secularism”. He added.

Further, The worst menace is this mental slavery, this sense of inferiority which Leftist intellectuals, through their power positions in education and the media, and their direct influence on the public and political arena, keep on inflicting on the Hindu mind. These Leftist intellectuals work in a strange collusion with the Islamic fanatics.

Generally, Elst also stated that the atheist Left should be the sharpest opponent of religious obscurantism and dogmatic adherence to anti- universalist belief systems like Islam. But in India, the two work happily together for the destruction of their common enemy: Hindu Dharma.

The Leftists are mistaken if they think they can use the Muslims for their own ends, he attributed. Ayodhya, Kashi and Mathura were also reflects the Hindu Movement, that is centre for ‘human art’. Thus, A model of temple culture has been developed with nationalizing the temple.

In the context of evidence, There is archaeological evidence that a temple, or at the very least a building with pillars, has stood on the Babri Masjid spot since the eleventh century. Of course, because of the structure standing there, the archaeological search has been far from exhaustive, but at least of the existence of this 11th century building we can be certain, Dr Koenraad Elst added.

When in December 1990 the Chandra Shekhar government asked both parties to collect evidence for their case, a small group of scholars, on being invited by the VHP, traced some more strong pieces of documentary evidence. At the same time, Dr. S.P. Gupta and Prof. B.B. Lai came out with unambiguous archaeological and iconographical proof that a Vaishnava temple has stood at the site until it was replaced with the Babri Masjid, he asserted.

In contrast, the Babri Masjid Action Committee could only muster a pile of newspaper clippings, articles and book extracts by partisan writers who gave their anti-Mandir opinion, but no evidence whatsoever, he asserted. The Hindu team of scholars had no difficulty 7 in demonstrating, in a rejoinder, the utter lack of proof value of the AIBMAC evidence.

The VHP documents ‘Evidence for the Ram Janmabhoomi Mandir’ and ‘Rejoinder to the AIBMAC Documents’ are the definitive scholarly statement on the Ayodhya, he attributed in his writing named “Ayodhya and After: Issues before Hindu Society”.

Dr Meenakshi Jain, She also talked about the ‘various factual accounts’ with the same regard and said that the ‘Mandir Party’ has not lost any case, while presented a strong body of facts. The Eye witness of Mandir side witness account ‘William Finch’, they says hindu were present.

In 1822, Hafiz said that, Babri Masjid mosque built in the side of temple. 22 sikhs entered in the Ayodhya and marked Ram-Ram-Ram and started Puja. In 1858, so many cases were filed in allahabad high court. Hindu created a ‘Ram Chabutra’, if these account are not enough then “Revenue account” becomes significant.

Significantly, S.P. Gupta challenged the left historian. In 1861, B. R. Grover described as a ‘Janam Asthan’ and Babri. ASI, It is always a secret site, it said that series of facts are available. So Importance of documents has decided the case. Dr Meenakshi Jain said that, Mathura is regarded as a birthplace of krishna. Kashi, it destroyed by Qutubuddin Aibak.

Prof Shri Prakash, New aspirations of Ayodhya will come in our society “King Ram and Ayodhya is capital”. It reflects the hindu civilization. How Ayodhya will safe the society? How it will become a reality? These area of discussion becomes significant, He stated. Notably, “It is a first panel discussion-public talk of #Academics4Nation & many more to come by the same in upcoming months”, Prof Shri Prakash added.

Following the landmark judgement, The Top Court pronounced its historic judgment in the decades-old Ram Janmabhoomi-Babri Masjid land dispute case On Nov 9, 2019. The top court in a unanimous verdict granted the entire 2.77 acre of disputed land in Ayodhya to deity Ram Lalla in a set of four directions.

Moreover, A 5-judge Constitution bench headed by Chief Justice Ranjan Gogoi also directed the Centre and the Uttar Pradesh government to allot a 5-acre land to Muslims at a “prominent” place in Ayodhya for building a mosque. The bench, also comprising Justices S A Bobde, D Y Chandrachud, Ashok Bhushan and S Abdul Nazeer, directed the Centre to set up a trust in three months to formulate scheme for construction of Ram temple at the site where Babri mosque was demolished in 1992.

The top court also cleared the way for the construction of a Ram Temple at the disputed site at Ayodhya, and directed the Centre to allot a 5-acre plot to the Sunni Waqf Board for building a mosque. In one of the most important and most anticipated judgements in India’s history, a bench headed by Chief Justice Ranjan Gogoi put an end to the more than a century old dispute that has torn the social fabric of the nation.

Following the top court judgement on the same, Central government has also announced a trust on Feb 6, named Shri Ram Janmabhoomi Teerth Kshetra, for the construction of a Ram temple in Ayodhya. However, The decision was taken during the meeting of the Union cabinet on Feb 6 morning, four days before the expiry of a three-month deadline set by the Top Court. PM Modi also asked all parliamentarians to support the construction of the temple in Ayodhya.

There will be 15 trustees in Shri Ram Janmabhoomi Teerth Kshetra Trust, of which 1 will always be from Dalit community. For such an unprecedented decision that strengthens social harmony, I thank PM Narendra Modi, Union home minister Amit Shah asserted. Consequently, the temple site will boost our richness of culture and it is likely to boost ‘global tourism’ at international arena. Let us see the grand prospect of Ayodhya temple.

Outbreak of Coronavirus puts “global recovery” at risk: IMF to G20 and WHO